Carmilla is vastly fortunate to have as a costumer Katie Jorgenson. She very kindly shared some of her artwork regarding her designs.

For Laura I figure that her access to clothing and fashion would be somewhat limited so I based her look on late 1930’s sewing patterns that were widely available and figure that she and Madame Peradon would probably be making a  lot of their own clothing. The fabric is a warm grey with a very subtle floral Jacquard weave, and the contrasting fabric is a cream color with a woven floral motif.

And then the mysterious woman who claims to be Carmilla’s mother:

For the Countess I found this really interesting metallic deep red printed fabric that looks almost black in certain light and then light red from other angles and is reversible to grey/black on the other side (which I used for the belt). It has a subtle floral/rose print to it that I thought would give her a sort of gypsy feel to her. I found a lot of images with women wearing fur stoles around their necks and I figured this would be an easy way to accessorize her and glam her up a little. (And I could make a faux one) Crazy hats were also prevalent so I thought a velvet black hat with some black netting would give her looks some added drama. 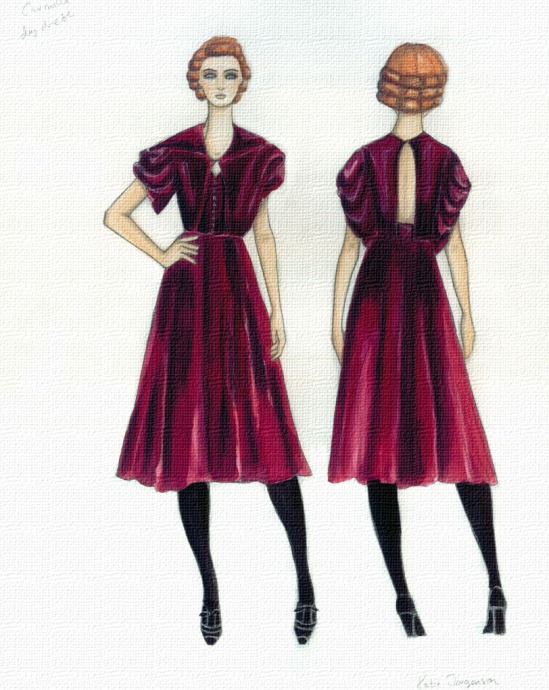 So for Carmilla‘s daytime look I based it off of a late 1930’s dress that I found online but changed it to a deep red velvet. I thought it would be interesting if she wore all of the colors of the nazi flag between her two costumes.

Contribute to Put CARMILLA on Stage